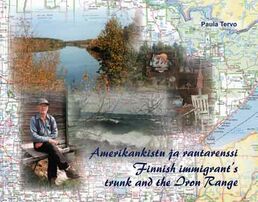 Text in English and Finnish (on opposite columns)

Finnish culture is thriving in many places in North America. Presently more than 600,000 Americans acknowledge their Finnish roots. The Finnish heritage is cherished by first generation immigrants as well as by many of later generations. This culture lives on among their descendants, but has a new character resulting from a mixture of new and old. Especially Finnish-American artists have found inspiration in this. The stories in this book depict a cultural heritage in transition.

How to Trace Your Roots in Finland

Migration from Finland to North America