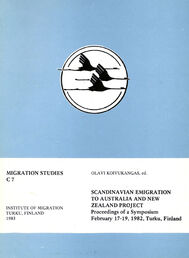 The Scandinavian community in Melbourne from 1870 to 1910 constituted the second largest non-British ethnic group. Because of their cultural background, political and social structures, Protestant religion and languages closely related to English, the Scandinavians found participation in Australian life not difficult. The first international symposium of Scandinavian emigration to Australia and New Zealand was held in Växjö, Sweden, in 1978.