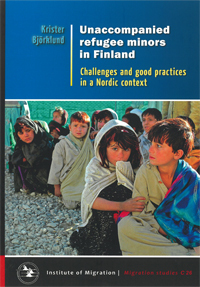 On the one hand, these asylum seekers are children and thus should be treated as migrants in a vulnerable situation requiring special care according to their needs, but on the other hand, the receiving countries seek to limit the number of asylum seekers, including minors. Attempts have been made to harmonize policies and procedures in Europe, but they still vary significantly between EU-countries.

This research shows that all Nordic countries have fairly well functioning reception systems based on the principle of the best interest of the child, but there are problems: fragmented organizational structutes with insufficient coopereation between different administrative sectors and problems with placing unaccompanied children in municipalities which often are unwilling to receive them. There are shortcomings in providing adequate language training and education, in access to health care, especially mental health services and in following up adolescents coming of age with supporting measures. The case of Finland is highlighted by interviews with caretakers, teachers, administration professionals and former unaccompanied minors.