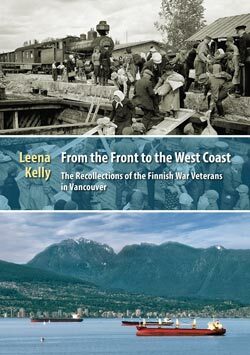 Leena Kelly: From the Front to the West Coast – The Recollections of the Finnish War Veterans in Vancouver
Erikoisjulkaisu E5. Siirtolaisuusinstituutti, Turku 2014.
170 s.

This is a story of a country, Finland, at war as told through the experiences of veterans. The book starts off with the Winter War, and continues on to the two other wars that followed, revealing history through personal experience as well as the consequences to the country as a whole; tragedy and hope.

However, after the war, these veterans left the country they had so fiercely defended to start a new life in Canada. This unique project, a historical snapshot, searches for answers as to why they left Finland for Canada. Did the wars influence their decision?

Despite the seriousness of the topic, sprinklings of humour in the stories lighten the mood.

”From the Front to the West Coast is a cultural achievement, because it attests the vitality of memories from decade to decade. The documentary is a reminder of how the memories of where you lived during childhood and youth endure forever in the human mind. It is amazing to witness the significance of being Finnish, and the significance of war memories, for these veterans.” — Mika Kulju, Finnish historian and non-fiction author of Frozen Hell – The Legend and the Tragedy of Raate Road.