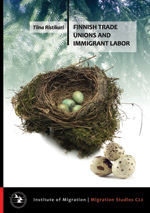 Across the world, an estimated 100 million labor migrants are on the move today. Numerous reports have highlighted the direct and indirect discrimination that immigrants experience in European labor markets, including Finland. The present study investigates the response of the Finnish trade unions to immigrant labor and ethnic discrimination in the Finnish labor markets in the 2000s. Has the bird mother accepted the new eggs, or does she simply care for her own offspring?

Using mixed methods and analyzing data from different levels of the trade union movement, this study shows that while the Finnish labor unions support employment based on immigration policies, the questions of immigrant interest representation divide the different actors.

The Societal Participation of Refugees and Immigrants